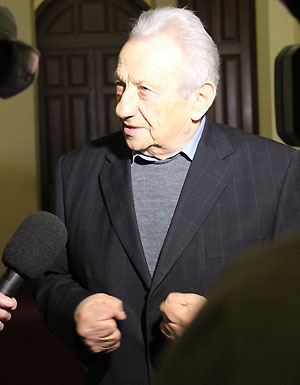 Alexei Gogua - laureate of the State Prize of D. Gulia, Honored Worker of Culture of Republic of Abkhazia, Honorary Academician of the International Academy of Adyghe, People's Writer of Abkhazia.

A. Gogua was the eighth child from the parents, the only brother of seven sisters. The main passion of his father was verbal creativity. He was an expert and an excellent performer of huge number of stories, ethical, lyrical stories, in short, all genres of oral literature.

Elementary classes he graduated in elementary school of Adzhampazra, then studied at the junior high school in Tkvarchal, and finished his secondary education in Pokvesh high school.

After the end of the Literary Institute (1960) he worked in different publishing companies and editorial ("Alashara" as magazine head of Department, as senior editor of “Abhazknigizdata”, as mainly children's magazine editor of "Amtsabz”).

He took an active part in socio-political life of Republic. He was a chairman of the socio-political organization of "Aidgylara", People's Forum of Abkhazia (1988-90), was elected as a deputy of the USSR (1989).

He began to write early. Author of more than 20 collections: novels, short stories, journalism. Made translations into Russian and other languages ​​of the former Soviet Union, and many of the stories - all major European and Japanese. In the Russian translation of A. Gogua stories published in various magazines of Moscow ( "Friendship of Peoples", "Meridian", "Rural youth", "Soviet Woman"), went separate editions collections of stories (two - the publishing house "Young Guard ", two in the publishing house" Soviet writer ", a collection of selected stories and novels - in the" Fiction "publishing house).

His translations: "The Death of Ivan Ilyich" by L. Tolstoy, "White Nights" and two parts of the novel "Crime and Punishment" by Fyodor Dostoevsky, stories of Andrei Platonov "Abkhazian stories", Fedin, "The Adventures of Pinocchio" by C. Collodi and others.

Alexei Gogua along with Shinkuba Bagrat is undoubtedly the largest and leading Abkhaz writer. Works by Alexei Gogua recognized by many readers as the best example of abkhaz prose.

He is a member of the Writers' Union of Abkhazia since 1959.