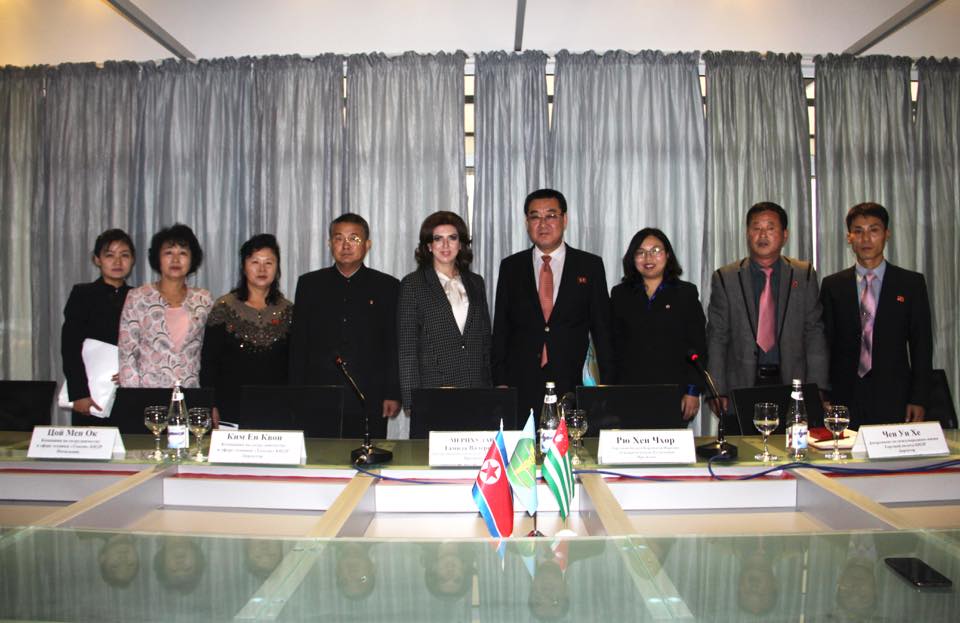 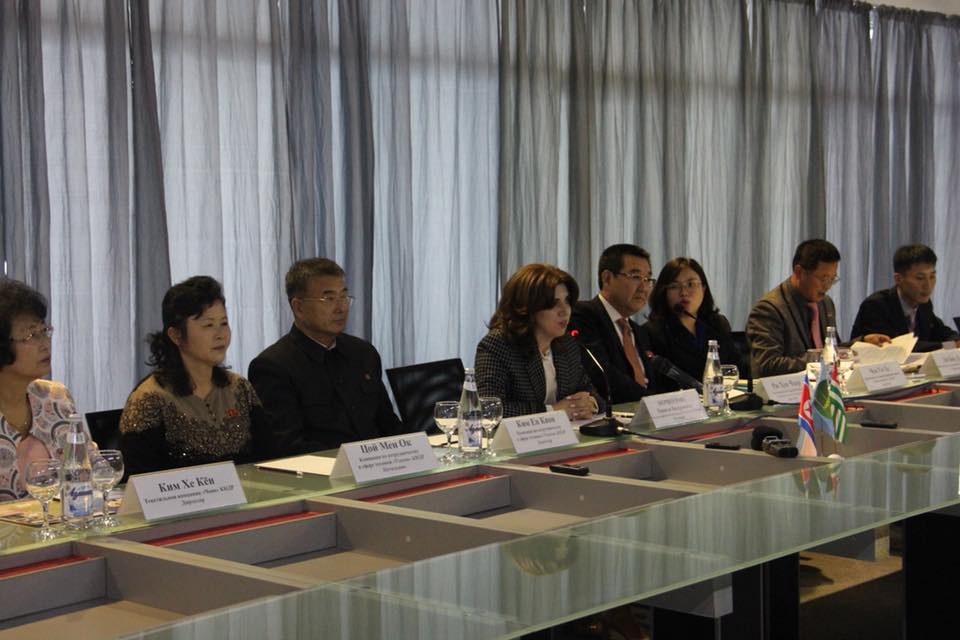 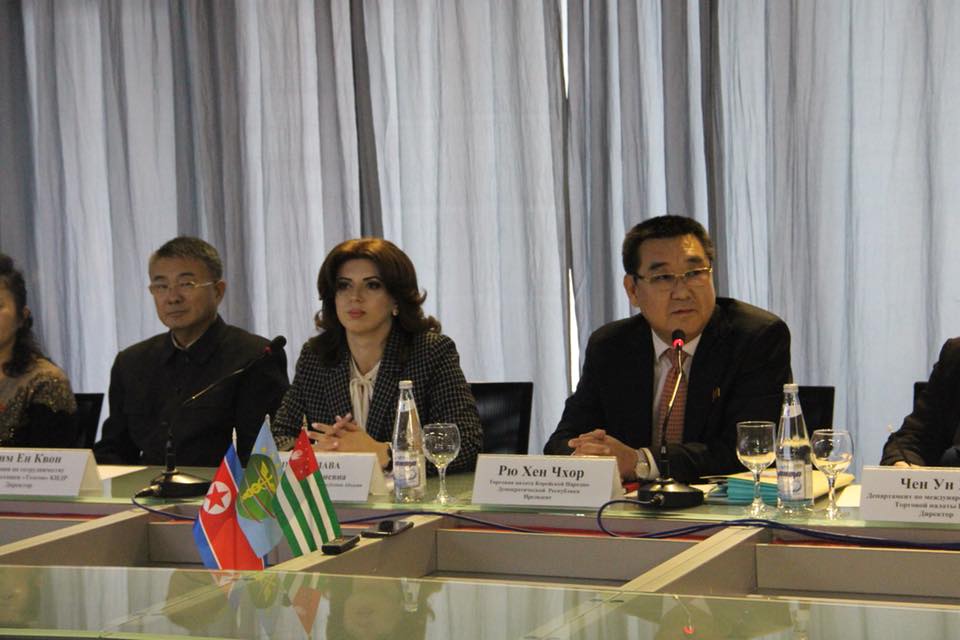 Opening the meeting, the President of the Chamber of Commerce and Industry of the Republic of Abkhazia Tamila Mertskhulava recalled how the cooperation between the chambers of the two Republics began.

In December 2017, the letter was sent to the first President of the Chamber of Commerce and Industry of the Republic of Abkhazia Gennady L. Gaguliya with a proposal to cooperate with the DPRK Chamber of Commerce. Negotiations were held for eight months and in August 2018, at the official invitation of the host country, the delegation of the CCI of the Republic of Abkhazia visited the capital of North Korea, Pyongyang. During the visit, an agreement on bilateral cooperation was signed between the CCI of RA and the DPRK Chamber of Commerce.

The Abkhaz delegation visited a number of enterprises, got acquainted with the culture and history of North Korea.

- We were very impressed by the trip to the DPRK. Moreover, our visit has dispelled many myths, which are actively spreading the media in different countries. This is a very successful Republic in its development, which is constantly fighting for its independence, and our situations are similar,”- noted Tamila Mertskhulava.

She reported that the Korean colleagues arrived to the republic with a return visit and they have something to offer our business community. The main purpose of the visit is to increase the trade turnover between our Republics.

“Maybe this is not a big amount that should be mentioned, but our colleagues have a desire to develop trade and economic relations and cooperation with our entrepreneurs,”- stressed the President of the Chamber of Commerce and Industry of Abkhazia.

In turn, Ryu Hen Chhor thanked the entrepreneurs for coming to the chamber presentation.

- We arrived to Sochi yesterday. The road was very hard, but today we feel at home. This is primarily because the air in Abkhazia is very clean, and we have a very strong desire to achieve success in cooperation with Abkhaz businessmen’, - said the chairman of the North Korean Chamber of Commerce.

He expressed great gratitude to Abkhaz colleagues and personally to Tamila Mertskhulava for the invitation to visit Abkhazia and warm welcome, as well as for the opportunity to present the economic potential of the DPRK to the Abkhaz business community.

According to him, during the visit of the President of the Chamber of Commerce and Industry of Abkhazia to North Korea, she had a number of meetings with the heads of several companies.

“It was thanks to Tamila Mertskhulava that our people learned about Abkhazia and expressed desire to cooperate with Abkhaz companies,”-emphasized Ryu-hyun Chor.

According to the Chairman of the DPRK Chamber of Commerce, construction companies would like to introduce their technologies and labor in Abkhazia. Others are ready to buy food products, in particular kiwi and other exotic fruits.

Logistics companies are going to explore our market and the possibility of trade deals between entrepreneurs of Abkhazia and North Korea.

Then Ryu Hen Chhor presented the company, whose representatives were part of the DPRK delegation.

The joint textile company “Choian” produces terry products and is ready to export its textile products to Abkhazia. Representatives of the company want to get acquainted with the local market and are ready to cooperate in this field with Abkhaz entrepreneurs.

The company “Kymvon” produces engines and equipment in demand in agriculture and is also ready to sell its products in the RA.

“We have been studying Abkhazia for a very long time, we’ve found that we have much in common and we can cooperate in different areas,”-believes Hen Chhor.

Taking this opportunity, he invited Abkhaz businessmen to DPRK to see how North Korea’s economy is developing and what conditions they have created for economic development.

- In April 2018, at the party congress, the top leader of North Korea, Kim Jong Un, said that we had invested a lot of manpower and resources in defense, but now we will start investing in the development of the economy. We, having rallied around our leader, are fighting to raise the standard of living of our people. We are constantly opening up new enterprises and factories and we have achieved great success in production compared to previous years,”-emphasized Ryu Hen Chhor.

He recalled that the political situation on the Korean Peninsula and around the DPRK is stabilizing, which is facilitated by the meetings of the North Korean leader with the US President and South Korea. Negotiations are being held between North and South in the field of politics, defense and economics. And everyone hopes that relations between the republics will improve.

“Therefore, our chamber is trying to establish trade with other states through cooperation with the chambers of other countries, including Abkhazia,”-said Ryu Hen Chhor.

He reported on the ever-growing number of delegations from China, Hong Kong, Singapore, the Netherlands, Germany and other countries visiting the DPRK. At the same time, many companies began to invest in the development of the economy and trade of North Korea.

“We want to cooperate with Abkhaz companies in the field of trade, technical and service maintenance,”-said the chairman of the DPRK Chamber of Commerce.

The President of the Chamber of Commerce and Industry Tamila Mertskhulava thanked the Korean colleagues for the presentation of the economic potential of North Korea and the desire to develop relations with the Abkhazian business community.

- While being in Pyongyang, we were convinced that Koreans are a hardworking people. They have a great desire to develop economic relations with other countries. Today we are talking about an increase in commodity turnover between our republics, but I am sure that recognition of the independence of the Republic of Abkhazia by the DPRK is just around the corner ’, - believes Tamila Mertskhulava.

Ryu Hyun Chor noted that each company has its own economic policy. It includes the plan of the main production, export and control over finances.

- The DPRK Chamber of Commerce is not a state organization and our activity is aimed at organizing trade between companies. But the economy always goes alongside politics and, if our economy develops successfully, this is also reflected in the political situation.

In response, the representative of the trading house "Aban" announced its readiness for cooperation.

“We are interested in anti-aging products, textiles, toothpastes and any other interesting products for sale,”-she said.

The deputy head of the Sukhum administration, Leon Kvarchia, thanked the delegation of the DPRK Chamber of Commerce for the visit to Abkhazia and the President of the Chamber of Commerce and Industry of the Republic of Abkhazia Tamila Mertskhulava for organizing a meeting with Korean businessmen, asked about the presence of high-tech industries in North Korea, including the field of industrial automation, biotechnology, intellectual systems, electronics, etc. He also asked Ryu Hen Chhor about the possibility of localizing some of the Korean industries in our republic, taking into account the existing preferential trade agreements with the Russian Federation, in terms of the duty-free mode of trade of goods and services, and RA loyal legislation to incoming investors. How interesting can it be to Korean businessmen?

According to Ryu Hen Chhor, they are ready to present all the goods in Abkhazia that they cannot export to Russia, but logistics is always important in this matter.

- During the visit, we want to clarify practical questions, in particular, what type of transport can we used? We have developed IT technologies, and we can send qualified IT programmers to Abkhazia. Our programmers work a lot in Russia, I think they can work in Abkhazia too,- said the chairman of the DPRK Chamber of Commerce.

- The transition from signing an agreement to practice is very important for us. Our colleagues came to Abkhazia not only to tell about themselves, but also to find new partners in Abkhazia. They are ready to move on to some practical actions - this, of course, is the most important thing. We are very pleased that they are ready to cooperate,”-stressed the President of the Chamber of Commerce and Industry of the Republic of Abkhazia.

At the end of the meeting, Tamila Mertskhulava presented her Korean colleague with a commemorative coin “Akua 2500”, which depicts the building of the city administration – the Sukhum business card.