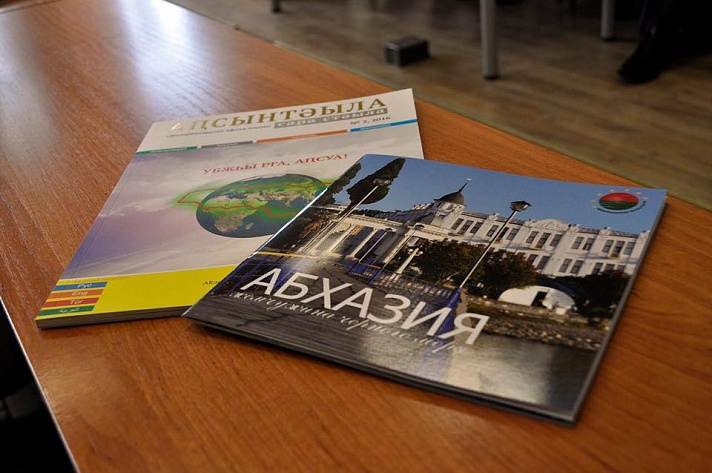 Opening the discussion, head of the Abkhaz literature in the Abkhaz State University Diana Jinjolia noted that the magazine is of great importance for the development of the Abkhaz culture, ethnicity and language. The meaning of the log - find each Abkhazian and to give the opportunity to learn all about his historical homeland ", - said Jinjolia.

Head of the department of journalism of ASU, candidate of philological sciences, associate professor Guram Amkuab said that the magazine publishes the "International Fund Apsny", which aims - the development Apsura. "Apsny International Fund" is not a political organization. It's designed primarily to promote Apsuara laws, assist the poor and large families, for the development of our country and boost the economy. Particular importance attaches to the establishment of the Foundation ties with Abkhazia, living in their historical homeland. Still we do not know the exact number of Abkhazians in other states. Journal employees traveled to countries where there is Abkhazian diaspora to unite our people.

Guram Amkuab informed that the magazine is published only in the Abkhazian language. However, the Internet edition of all the materials translated into Russian, Turkish, English and Arabic languages.

The chairman of the "International Fund for Apsny" Soner Gogua told the magazine about the projects, project "Ани Амаалықьи" (“Mother and the child”) is actively working with the first day of the creation of the magazine. In all the cities and regions of the country, we collect lists of families in which a child is born, and pass gifts for mother and baby, a newborn. The second project is called "Аҧеиҧш" (“Future”). In the framework of each month the Fund provides assistance to two poor families in the form of household appliances and home accessories. There is another project - "Агәыразра" (“Kindness”). It`s task - every month ten kids donate school supplies".