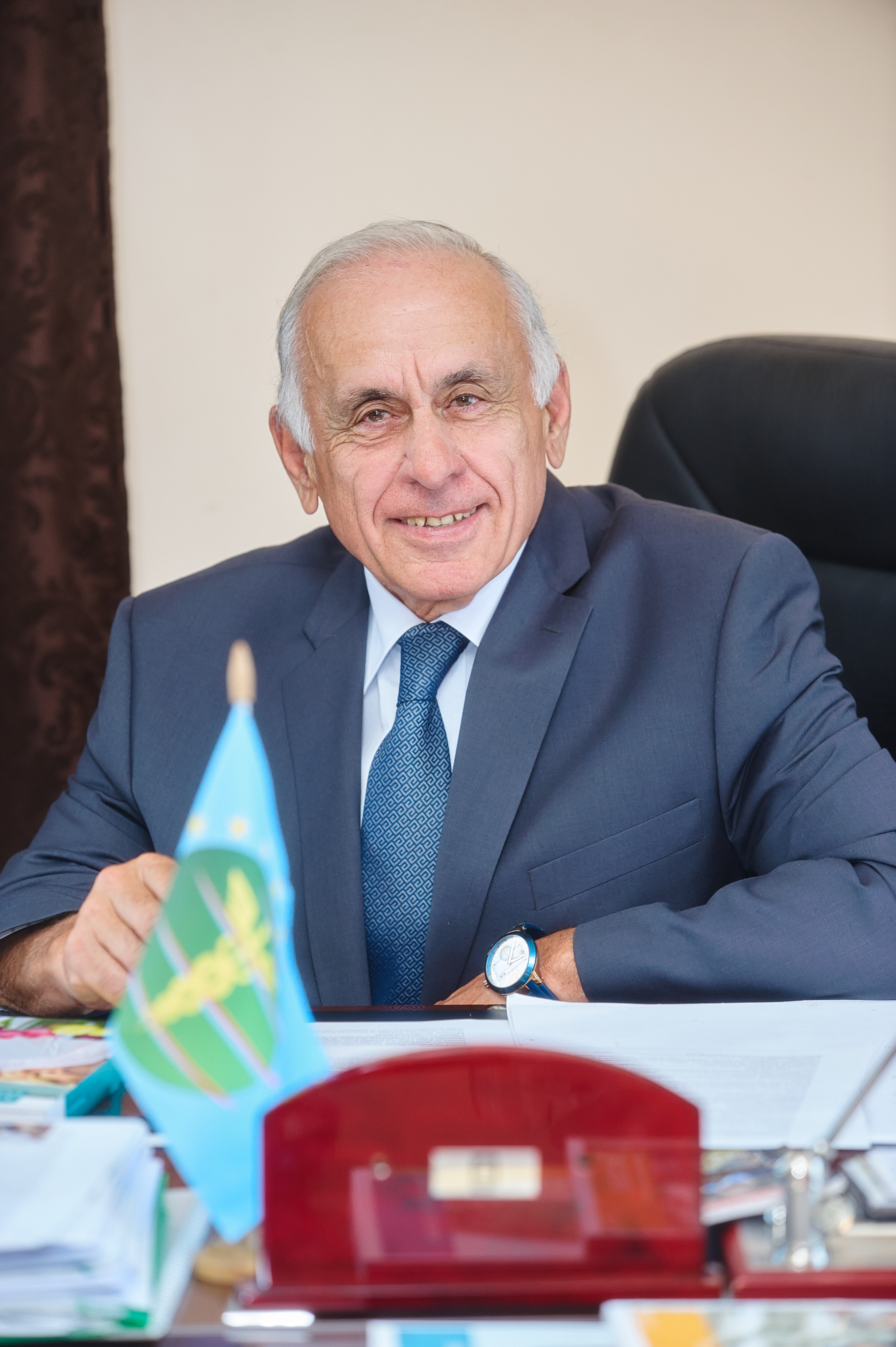 He could have done much more…

Gennady L. Gaguliya was a famous state and public figure, the prime minister, a true professional in his field, an excellent leader, a patriot and a good man who, at all floors, focused all efforts for his country and its people.

We gained a huge experience, relevant values, knowledge and skills from him, were seeking for his advice on all matters. He was very patient and responsive, he could always listen to everyone who asked him for support, give an appropriate advice, help out…

We have lost a wonderful person, talented in all respects, carrying only positive and good energy. He did not just leave us, he took with him a piece of our soul ...

We all will miss him... He will remain in our memory and the memory of those who knew him as a strong person, full of buyancy, activeness and professionalism!

He’s gone but his star is shining bright

He’s gone but he pave the way for our future…

The death of loved ones, relatives, and friends is always a sad and tragic event in life of every person. It is so hard to find the right words to express all the grief and pain. People who closely communicated with Gennady Gaguliya - the leader, friend and mentor share their feelings and thought with us:

Deputy Head of the Presidential Administration of the Republic of Abkhazia Adgur Lushba:

It is so hard for me to talk about him using the past tense, he was a friend of mine, and we were working together for many years.

Gennady Gaguliya is one of my main mentors; I gained a big experience from him.  It was a great person who could listen to you, find the underlying cause of the matter, and suggest a way to solve a problem, find the right words, and give an advice that would be useful.

He treated me in a fatherly way, and over the time, our joint work activity grew into a friendship. I have always appreciated his attitude towards me; I tried and try to be like him in many respects - in his approaches to solving difficult issues, in wisdom, in pragmatism, in his warmth and approach to people-both in the public service and in everyday life.

He had a huge talent- planning steps ahead. Being a man of highest State level and thinking, he could solve any problem. Such work required a lot of time and, therefore, his working day was not affected by the limits (from 9:00 to 18:00).

Many people were coming to him on personal matters and he could find time for everyone, listened to everyone, and, based on his life experience and human considerations, was sharing good advices. At the same time, Gennady Gaguliya could call a spade a spade, so that a person should not create illusions in vain.

Our paths were crossed many times in various fields - both when we worked together in the civil service and in the Chamber of Commerce and Industry of Abkhazia. And everywhere he was distinguished by his severity, insistence,  efficiency, deadlines and quality of work.

Gennady Gaguliya laid all these qualities since he was young, otherwise he would not have been able to achieve career development and respect towards himself from completely different people.

Gennady Gaguliya could solve any difficult situation, he was creating confidence that the correct solution would be found in the end.

Despite the fact that he was a politician of the Soviet school, he was a modern business executive and a statesman with modern thinking, easily oriented in different situations. Gennady Gaguliya was solving current problems quite easily, and it was possible to talk with him on various topics.

Starting the duties of the Prime Minister, he could easily find solution of all issues. He was sociable in his work: he always listened to the opinions of others, despite the premiership level he was consulting with them. All instructions were previously discussed.

During meetings, considering issues of the financial and economic bloc, he repeatedly was explaining to us how to work, create a platform, how to act in the future. He built his work on complete trust and always emphasized that ministers are responsible for their sphere, and therefore should be given appropriate powers. Moreover, if you are responsible for your work, then do whatever you think is right. He taught us to be responsible.

I have always been surprised by the sociability of Gennady Gaguliya. I was privileged to be a member of the Abkhaz delegation during the business trips to foreign countries and see that he was met with a great dignity, at a very high level as a representative of Abkhazia. Thanks to his charisma, we were received as if we were a recognized country. I believe that the recognition of the Republic of Abkhazia by the Syrian Arab Republic is also his achievement.

During our first visit to Syria in August 2017, thanks to his good relations with representatives of our diaspora, the Syrian Chamber of Commerce and business community, we organized high-level meetings with the ministers of economy and foreign affairs and we were discussing issues of possible recognition of Abkhazia.

Gennady Gaguliya was very comfortable in communicating with people and could find an approach to anyone.  I sincerely regret that Gennady Leonidovich has passed away. It’s a great loss for Abkhazia.

Deputy Head of the Presidential Administration of the Republic of Abkhazia (2011-1014) Christina Ozgan: It is very difficult to talk about Gennady Gaguliya using the past tense.

Gennady Gaguliya is undoubtedly a very bright and charismatic person in the history of our country. His biography and vivid life testify that he was a man who was full of many qualities that allowed him to be a leader. Few people in history managed to lead the government of Abkhazia at different periods.

He was trusted to be the head the Cabinet of Ministers in the most difficult time for the country, because he had exceptional organizational skills, high performance and the ability to highlight the main things where it was necessary to concentrate all efforts.

I want to emphasize that Gennady Gaguliya knew how the state system should work and, of course, it is important not to forget about his significant contribution to the state structure of our country.

I really want to mention his humanity, warmth and care. I think I can allow myself to say that he had a special feeling, which allowed him to see the abilities and possibilities in the character and personality of the people with whom he worked.

Gennady Gaguliya played an important role in my life, entrusting me substantive areas at a certain stage. And I want to believe that I did not let him down.

In my memory, he will always remain as one of the prominent political leaders, personifying a whole era in the history of Abkhazia.

Former Prime Minister of the Republic of Abkhazia (1999-2001), now Advisor to the President of the Chamber of Commerce and Industry of the Republic of Abkhazia Vyacheslav Tsugba: The death of Gennady Gaguliya is one of the sad and tragic events in the history of our state. Time flies, but the wound inflicted on the family, his friends, family and those who knew him, will stay forever in our hearts.

As a state and public figure, Gennady Gaguliya made a significant contribution to the formation and development of the Abkhaz state. He is one of those who together with Vladislav G. Ardzinba were at the forefront  of state building.

Gennady Gaguliya tried his best for the Victory in the Patriotic War of the people of Abkhazia in 1992-1993. Thanks to his organizational skills, in these difficult days for the republic, our fighters, refugees were provided with food.

After the war, during the most difficult time, when it was not about development, but about survival, he headed the government of Abkhazia and was able to do everything so that our war-weary people would survive.

The last time he came to power as a prime minister he was associated with hope of significant changes in the republic and with the ability to unite society. He was devoted to work, wasn’t not engaged in intrigues and did not like people who are engaged in them. Being equidistant from everyone in his political views, but he had his own principled opinion.

Gennady Gaguliya was a disciplined, responsible person. He demanded the same responsibility from his subordinates, was strict to himself and to those around him, but at the same time he knew how to be friends and appreciate friendship. Despite his age, he was full of energy and optimism.

Being a prime Minister for the third time Gennady Gaguliya was able to prove that without serious expenses one could do everything better and more. He had so many plans, but his tragic death ruined everything.

Gennady Gaguliya left a good memory as a citizen, as a good family man and caring father, an attentive friend and comrade.

He left his mark in the history of our state.

Deputy Director of the Research Institute of Agriculture Yuri Akaba: It is very difficult and painful to talk about Gennady Gaguliya after the tragic events. I lost a close friend, and the republic lost an outstanding person.

I have known him for more than 30 years; we worked together six years in the Chamber of Commerce and Industry. We met when he worked as a chairman of the State Committee for Foreign Economic Relations, I was the chief agronomist, then the deputy director at the Eshera Uchkhoz.

I met him in Gudauta during the war: every penny was  worth the weight in gold and we, despite the proximity of the front and the bombing, decided to collect tangerines at the state farm. I came to him for permission to export citrus fruits. Gennady Gaguliya was terribly surprised: “Are you still collecting tangerines this time?” Then he decided to give us permission.

The war ended and two years later Gennady Gaguliya was appointed to the position of a Prime Minister. The formation of the government began and he recommended me the post of Minister of Agriculture. We were forced to work in the most difficult conditions: the consequences of the war, then the blockade of Abkhazia by Russia. The budget of the Ministry of Agriculture is 37 thousand rubles ... And in those conditions, all the necessary work was executed, tobacco was grown everywhere, including Gagra - where no one ever worked on this crop. He was a good organizer and leader.

It was very comfortable to be with him during business trips, because he could find common language with everyone. Sometimes I was asking him: “Why do we pay visits to other countries if we are not recognized!” And he answered: “We need to drive a peg everywhere, in all republics, and someday it will be useful for us! One day we will be recognized; therefore, we must represent the interests of Abkhazia everywhere. ”

It was Gennady Gaguliya who initiated the creation of the Chamber of Commerce and Industry. At first, this idea was received with hostility. Few people liked that the chamber affects all areas of activity.

And what a galaxy of young specialists he raised: he gave them his knowledge and experience, inspired love for work and a sense of responsibility. Any member of the Chamber of Commerce today can be appointed to any position.

It is worth noting the trust from the Russian side - they knew about his experience, knowledge, ability to work and, that he would never let anyone down.

I still can not believe that Gennady Gaguliya is no longer with us.

He could have done much more…