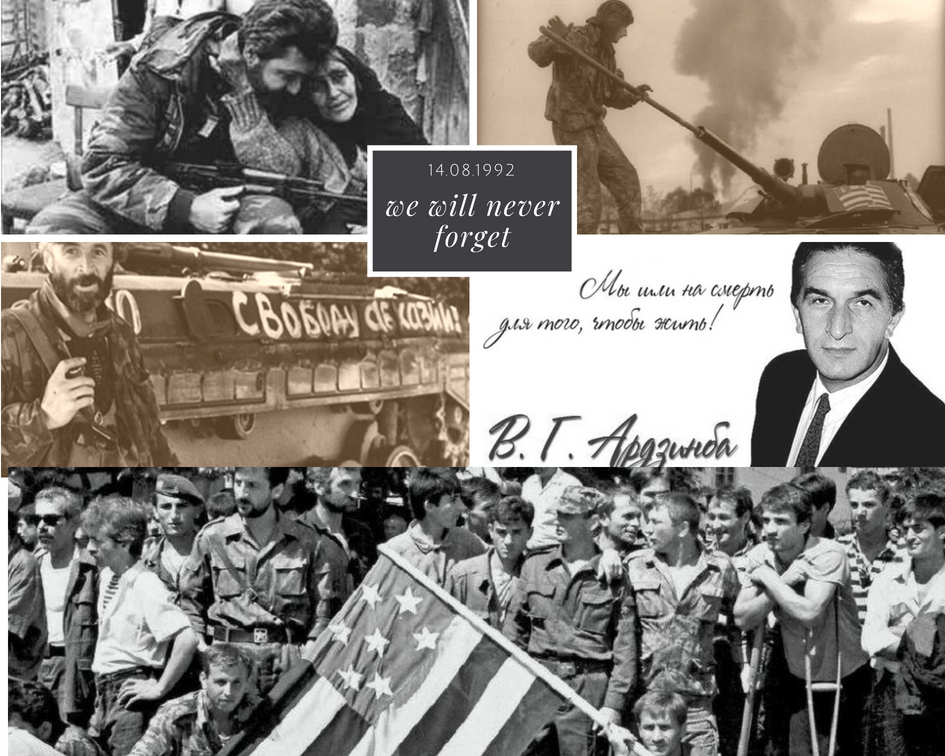 August 14, all cities and regions of the Republic lay flowers to the monuments and cemeteries of soldiers killed in the Patriotic War of Abkhazia in 1992-1993.

On August 14, 1992, Georgian troops invaded Abkhazia, a Georgian-Abkhaz war that lasted 413 days and ended with the victory of the Abkhaz people.

Memorable events are taking place in all regions and cities of the Republic on this day, and on Sunday all religious churches in Abkhazia hold prayers in memory of  war victims killed in 1992-1993.

The main stages of the Patriotic War of the people of the Republic of Abkhazia:

- On August 14, 1992, the troops of the State Council of Georgia enter the territory of Abkhazia, pass through the Gal, Ochamchira, Gulripsh districts and reach the eastern suburbs of Sukhum. Street fighting begins in the city.

- On August 14, 1992, the Presidium of the Supreme Council of Armed Forces adopts the resolution "On mobilization of the adult population and transfer of weapons to the regiment of the internal troops of Abkhazia"

- On August 15, 1992, mass movement of support for the fighting people of Abkhazia takes place in the republics of the North Caucasus

- August 18, 1992 robberies, looting and violence acquire a mass character on the territory under the control of Georgian troops

- On August 19, 1992, Gagra was completely captured by Georgian troops

- On September 3, 1992, negotiations were held in Moscow between Boris Yeltsin, E. Shevardnadze and V. Ardzinba. The final document was signed: the cease-fire from 12:10 on September 5, the removal of armed formations from Abkhazia, the redeployment of the armed forces of Georgia, the resumption of activities of legitimate authorities.

- September 5, 1992 in 10 minutes after the ceasefire was started, at 12:00, the document was violated by the Georgian side's shelling of Abkhaz positions in the village Eshera. At the same time at 22:30 the Georgian units attempted a tank attack.

- On September 16, 1992, the Presidium of the Supreme Council of Armed Forces adopts the resolution "On armed aggression of troops of the State Council of Georgia against Abkhazia" and "On the Genocide of the Abkhazian People"

- On September 22, 1992, the Russian Federation completed the transfer of weapons to the Akhaltsikh Motorized Rifle Division.

- Many months blockade of the Abkhazian city Tkuarchal started from September,

- On October 1, 1992 at 17:00 the Abkhazian units are on the offensive, the village Colchis (currently Psahara) is occupied; 2 - after fierce fighting Gagra was released.

- On October 6, 1992, the Abkhaz units liberate Leselidze (currently Gechripsh) and Gantiadi (currently Tsandripsh); Abkhazia re-establishes control over its sector of the Abkhaz-Russian border; retreating troops of the State Council of Georgia, fleeing from Abkhazia, cross the border river Psou, hand over weapons to Russian servicemen and declared internees

- On October 11, 1992, the Ministry of Defense of the Republic of Abkhazia is established

- On October 23, 1992, as a result of the purposeful action of the Georgian special services in Sukhum, the funds of the State Historical Archives of Abkhazia and the archive of the Institute of Language, Literature and History are destroyed.

- October 26 - November 2, 1992 on both fronts there are heavy fighting. Abkhazian troops are close to Ochamchira city, but later return to their original positions. Abkhazian troops inflict serious damage on the enemy in Sukhum direction,

- On December 14, 1992, the Georgian side knocks down a Russian MI-8 helicopter that took the inhabitants of the besieged Abkhaz town of Tukarchal. Crew and 60 passengers, mostly women and children were killed.

- January 5, 1993 offensive operations of the Abkhazian troops on the Gumista Front. The advanced units reach the outskirts of Sukhum, but further success couldn’t be developed.

- On January 11, 1993 Vladislav Ardzinba was appointed as a Commander-in-Chief of the Armed Forces of the Republic of Abkhazia

- On March 16, 1993, in the course of a counterattack, Abkhazian forces crossed the Gumista River and seized strategic heights near Sukhum. However, the offensive did not develop further. After bloody battles on March 17 and 18, the Abkhaz units returned to their original positions

- On April 26, 1993, the SU-25 attack aircraft of the Georgian Air Force bombed Gudauta. In a new statement of the Supreme Council of the Republic of Abkhazia, this action was regarded as evidence of the previous desire of the Georgian leadership to "stake on a military solution to the problem of Georgian-Abkhaz relations"

- May 14, 1993 Boris Pastukhov appointed personal representative of the Russian President for the Georgian-Abkhaz conflict

- July 2, 1993 a landing troop of the Abkhazian Armed Forces was landed and for more than a week kept a strategic bridgehead in Tamysh village, Ochamchira Front area.

- On July 3, 1993, the offensive began on the Abkhaz side, Gumista Front: the Gumista river was forced, the enemy's defense was broken

- On July 12, 1993, control over the Shroma-Sukhum highway was established

- On August 9, 1993 V.Ardzinba sends a message to B.Yeltsin and Boutros-Ghali, draws attention to the ignoring of the Sochi Agreement by the Georgian side: the firing of Abkhaz positions continues, the timetable for the withdrawal of troops and equipment breaks down

- August 24, 1993 meeting in Moscow between B. Yeltsin and V. Ardzinba. The attention of the Russian President is drawn to the violation by the Georgian side of the Sochi Agreement

- On September 17, 1993, the Gumista River was forced on the Gumista Front; 20 - The Abkhaz command suggests that the Georgian troops cease their resistance and leave the blocked Sukhum by a safe corridor, there was no response

- On September 30, 1993, pursuing the retreating enemy, the Abkhazian troops withdrew to the Abkhaz-Georgian border along the r. Ingur, the entire territory of the Republic of Abkhazia was liberated from the invaders.